In July 2004, Google tried a innovative way of recruiting talented people, by posting a mathematical puzzle on a billboard on 'Highway 101' in the heart of silicon valley. The billboard read:

The answer, 7427466391.com, would lead to a Web page with yet another equation to solve, with still no sign of the firm that wanted to recruit some of the best math guys, out there. It wasn't known that it was Google, until the puzzle was cracked.

Here's a pic of that billbaord: 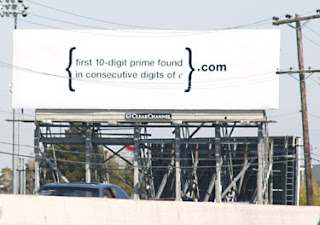 I got to know this puzzle much later and thought of giving it a try. Without thinking much, my first idea was to use a simple, naive, brute-force approach of calculating Euler's Number (e) to around 10000 digits and then loop over the decimal part of 'e', taking 10 digits in each step and incrementing by 1 digit, in each step. I tried it and it worked, without consuming much time.

"Euler's Number" can be calculated in a couple of ways, but I used the following formula:

With the above formula, we can calculate 'e' by looping through, finding factorial and adding up 1/Facorial(n), in each and every loop. Java was my programming language of choice, but calculating e to 10000 digits precision is a problem because you cant use the normal primitives like "double", "float" or whatever to contain the huge number of digits in the decimal part of a number. So, it was pretty obvious that I had to use 'BigDecimal'.

One more tricky part was to determine 'how many times should the program loop through , for the precision to be around 10000 digits'? I tried a couple of combinations and found that "100" would be good enough. Also it doesn't consume much time. If you try it for 10000 or more, it would probably take a couple of minutes or hours.

Ok....I looped through "100" times in the code, calculated 'e' to a bit more than 10000 digits, in the first step. The next step, I looped through the decimal part of 'e', taking 10 char substrings (starting from the decimal point) in each step and checking whether its a prime or not. If it's a prime, the Puzzle is solved!

Here's the Java code for finding the 'First 10 digit prime number in the consecutive digits of e':

I ran this program and got the following output:


PS: The above solution is a very basic, brute-force/trial-and-error approach that I used, but it very much solves the puzzle.

Disclaimer
The views expressed on this blog are my personal views and do not reflect the views of my employer or campaigns I am supporting.

All sample code is provided for illustrative purposes only. These examples have not been thoroughly tested under all conditions. The writer therefore, cannot guarantee or imply reliability, serviceability, or function of these programs.

All programs contained herein are provided to you "AS IS" without any warranties of any kind. The implied warranties of non-infringement, merchantability and fitness for a particular purpose are expressly disclaimed.